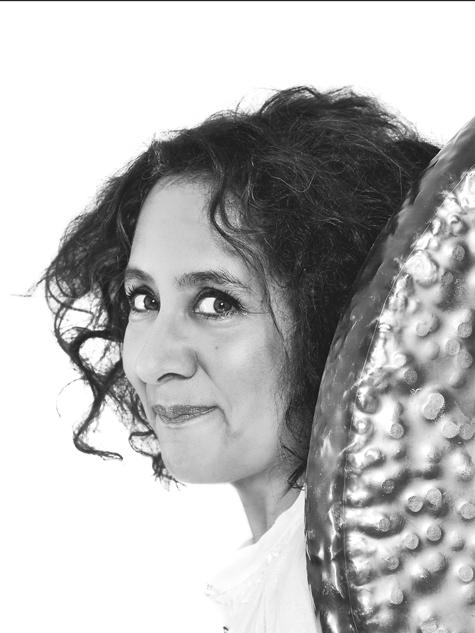 Marilyn Mazur was born in New York 1955. She has been living in Denmark since she was six years old.

As a child and teenager she studied classical piano and ballet. (Her career as a dancer started, when she joined The Creative Dance Theater in 1971). She formed her first band Zirenes in 1973, and by 1975 she was working regularly as percussionist, drummer and singer for various groups. Her breakthrough on the Danish scene happened with the popular fusion band Six Winds and as leader of the all women music-theatre group Primi Band.

MM studied at The Royal Danish Conservatory of Music in Copenhagen, but she is primarily self taught on her many instruments, drawing on inspiration from music from all over the world.
In 1983 she received The Ben Webster Award and formed the jazz quartet MM4 with saxophone player Uffe Markussen. Since then she has continued to develop her uniquely personal musical vision with many musicians and ensembles.
The year 1985 was a turning point for MM. She was invited to take part in the recording of Danish composer and trumpet player Palle Mikkelborg's tribute to Miles Davis "Aura". Davis took part in the recording sessions himself and a few months later he asked MM to join his band. She toured with the Miles Davis Band for long stretches of time all over the world. (CD "Live Around The World" WB 9 46032-2). In 1986 she also toured with the Gil Evans Orchestra (Gil Evans/Laurent Cugny Big Band Lumiere "Rhythm-a-ning" Emarcy 836401/2 + rerelease> Universal Music 836 401-2, "Golden Hair" Universal Music 838 773-2). In 1987 a world tour with the Wayne Shorter Quintet was on the agenda, and by 1988 she was back with the Miles Davis Band.

In 1989 MM decided to leave the Miles Davis Band to concentrate on developing her own music and the 7 piece international orchestra Future Song. For more than a decade, Future Song was one of MM's main groups with which she produced many special projects involving dancers, choirs and much more. (CD's: Marilyn Mazur's Future Song vBr 2105-2, Small Labyrinths ECM 1559, Daylight Stories STUCD 04082).

In 1991 MM joined the Jan Garbarek Group with whom she toured till 2005. (CD's: ECM 1500, 1585, 1685/86).
Since then, Marilyn has dedicated her time to actively composing and doing her own original projects and touring with her various bands; since 2008 mainly with Marilyn Mazur Group, Celestial Circle and Mystic Family.

1999: MM performs at The First Biennale de Percussions in Conakry, Guinea with members of The Guinea Ballet Joliba.

2000: Original composition "Jordsange" (Earth Songs) for choir and bigband is released in March (Dacapo DCCD 9431)
MM appears at EXPO 2000 in Hannover and performs solo and with her new band MM's Percussion Paradise at festivals in Molde and Oslo. Artist in residence in Bologna 2000.

2001: MM receives the prestigious Jazzpar Prize and puts together a hand-picked 14-piece band for the Jazzpar Concerts and the recording of "All The Birds" (STUCD 02072).
Initiates collaboration with Norwegian bigband "Norske Store".

2005: MM records a solo album for ECM Records featuring Jan Garbarek as guest artist. Titled "Elixir" this album is released in January 2008. Other activities in 2005 included the production of a documentary about MM and her music by renowned Danish director Chr. Braad Thomsen. She also toured a lot with her various groups including a new trio with Per Jørgensen (N) and Anders Jormin (S).

Artist in residence at Molde International Jazz Festival in july with 6 different concertprojects.
Marilyn is commissioned by Teatret Vårt in Molde to compose the music for a contemporary version of the classic Norwegian play, Bjørnstjerne Bjørnson's Sigurd Slembe. It was performed in Molde during August 2008.
in 2008 she also wrote music for the Childrens dancetheatre-play Flip Flap and played a long Rikskoncert-tour in Sweden with her Future Song.

Marilyn is nominated as a finalist for the Jazz Journalists Association Jazz Award in the category of: Percussionist of the Year.

2008/9: Marilyn is once again commissioned to write the music to the staging of a classic play, this time it is “The Beggars opera”. Together with the theatre group Cantabile 2, Marilyn and her quartet, Marilyn Mazur Group, performs nonstop onstage in a breathtaking physical musical adventure.

Since 2009 Marilyn has toured extensively with her Celestial Circle and Marilyn Mazur Group all over Europe, both groups still being very active in 2014. She also tours quite a lot as guest soloist with lots of projects in Europe.
In 2009 she was the Session-host in march at Oslo Nasjonale Jazzscene in Norway.

2012 Marilyn composed a choral suite as the major part of the Choir-collaboration "Eksistens" (Existence), which since has played many times in Denmark.
It's performed by the Tritonus Choir conducted by Lise Bjerno, Hans Ulrik, Makiko Hirabayashi, Klavs Hovman and Marilyn Mazur.

2013 lots of tours and musical meetings. Had a great concert at Copenhagen Jazzfestival with Spirit Cave: Jan Bang, Nils Petter Molvær, Eivind Aarset and Marilyn.
Marilyn received the Grethe Kolbe Grant given by the Danish Conductors Association.
Marilyn is enjoying all the variations in her musical life. Continuing to have the broad perspective, still being - and growing as - a composer, bandleader, drummer, percussionist and sometimes also singer and pianist. Always up to something new, but also loyal to her close musical companions.
.........

In 1989, 90, 95, 97 98, 02 and 08, the American jazz magazine DOWN BEAT selected Marilyn Mazur as "talent deserving wider recognition" in the category "percussion" in their annual critic's poll

As a composer Marilyn Mazur receives a lifetime grant from The Danish National Arts Foundation.