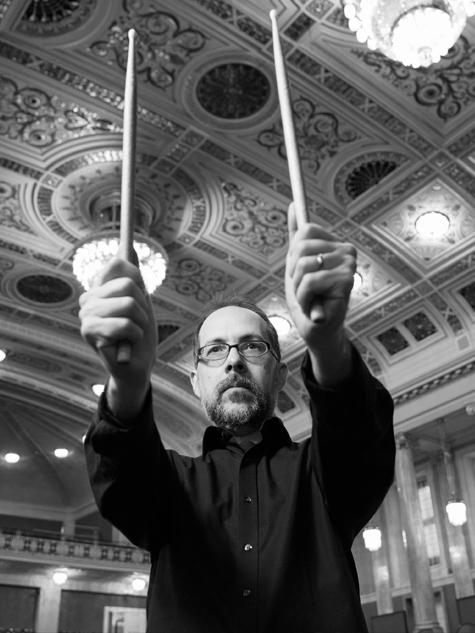 It’s traditional, when paying compliment to drummers, to draw comparisons with the octopus, implying agility beyond the means of a paltry pair of human hands. But when considering John Hollenbeck, the multi-limbed creature that seems most appropriate to invoke is the mythical hydra; for while Hollenbeck is certainly no stranger to rhythmic intricacy, it’s ideas that seem to spring forth like so many heads, two more arising as one falls away.

Hollenbeck is a composer of music uncategorizable beyond the fact of being always identifiably his. A conceptualist able to translate the traditions of jazz and new music into a fresh, eclectic, forward-looking language of his own invention, intellectually rewarding yet ever accessibly vibrant. A drummer and percussionist possessed of a playful versatility and a virtuosic wit. Most of all, a musical thinker – whether putting pen to paper or conjuring spontaneous sound – allergic to repetition, forever seeking to surprise himself and his audiences.

The prolific and unpredictable nature of Hollenbeck’s output has been evident since he first emerged as a leader in late 2001, releasing four completely different albums within a matter of months. Three of them (Quartet Lucy, the duo CD Static Still, and no images, featuring several different configurations) introduced the partnership of Hollenbeck and iconoclastic vocalist Theo Bleckmann, who continue to collaborate in a variety of offbeat settings. Along with keyboardist Gary Versace, they form the Refuge Trio, as boundary-free a small group as one is likely to find.

The last of that initial burst of creativity was the self-titled debut of the Claudia Quintet, Hollenbeck’s longest-running ensemble. Over the course of its eight CDs, Claudia has cemented its reputation as one of the most innovative and adaptable units in modern jazz, so deftly attuned to one another that Hollenbeck’s most dizzying compositional leaps are taken with an air of playfulness and skewed humor. Claudia’s latest release, Super Petite, is a potent package that condenses virtuoso playing and a wealth of ideas into ten compact songs.

Claudia has received grants from the Chamber Music America New Jazz Works: Commissioning and Ensemble Development program to compose a suite which was recorded for 2009’s Royal Toast, and from Arts International and the Mid Atlantic Arts Foundation to travel to Brazil and Nepal for performances. The quintet was commissioned by the University of Rochester to set the work of Kenneth Patchen as part of their 100th birthday celebration of the ground-breaking poet, which can be heard on the 2011 release What Is the Beautiful?, featuring vocals by Theo Bleckmann and Kurt Elling. The Claudia Quintet can also be heard performing the theme music to Poetry Off the Shelf, a weekly audio program on PoetryFoundation.org.

Hollenbeck has been acclaimed for his unique twist on big band music - most notably through the work of the John Hollenbeck Large Ensemble, which trades the gale force blowing of most such bands for a multi-hued palette of tonal colors and rich, evocative atmospheres. The JHLE received Grammy nominations for both of its releases: A Blessing in 2006 and eternal interlude in 2009.

John was nominated again in 2014 for his arrangement of Jimmy Webb’s “The Moon’s a Harsh Mistress” from the album Songs I Like a Lot, commissioned and recorded by the Frankfurt Radio Big Band, featuring vocalists Kate McGarry and Theo Bleckmann, and pianist Gary Versace. That album and its companion piece, 2015’s Songs We Like a Lot, puckishly reimagine pop songs by the likes of Cyndi Lauper, Daft Punk, Queen and Burt Bacharach with big band arrangements, transforming familiar songs with surprising insight and audacious wit.

The composer’s large-band pieces have also been recorded by Austria’s Jazz Bigband Graz on 2006’s critically-acclaimed Joys and Desires. In 2010, the CMA/FACE French-American Jazz Exchange Program awarded Hollenbeck a grant to develop work with Daniel Yvinec and the Orchestre National de Jazz of France, resulting in the release of Shut up and Dance (Bee Jazz), which included the Grammy-nominated composition “Falling Men.”

If these projects can safely be termed “jazz” (at least by those comfortable with the label’s more progressive interpretations), they should by no means be taken as indicating that Hollenbeck’s output is limited to even that genre’s most elastic borders. His growing body of commissioned compositions relate just as obliquely to the “new music” tag, exemplifying his ability to not so much defy categorization as to evolve beyond its necessity. One of Hollenbeck’s earliest appearances on record was as the composer of “The Shape of Spirit,” a piece for wind ensemble issued on the Mons label in 1998. The following year he composed “Processional and Desiderata” for wind ensemble and orator (released by Challenge Records in 2001), written for and featuring the voice and trombone of John’s mentor, Bob Brookmeyer.

John’s piece “The Cloud of Unknowing,” commissioned by the Bamberg Choir in Germany, fit comfortably alongside works by J.S. Bach, Igor Stravinsky & Paul Hindemith when it was released in 2001 on the Edel Classics label, while his 2004 chamber piece “Demütig Bitten,” commissioned by Germany’s Windsbacher Knabenchor, was released on the Rondeau label along with works by Giovanni Gabrieli, Josquin des Prez and J.S. Bach (again). In 2002, his IAJE Gil Evans Fellowship Commission piece, “A Blessing,” featuring Theo Bleckmann’s stunning vocals, was performed to critical acclaim at the IAJE Conference; and in 2003 his IAJE/ASCAP Commission, “Folkmoot,” was premiered in Toronto, Canada.

In 2009, John compiled several recordings of his chamber pieces on the CD Rainbow Jimmies, made possible by his 2007 Guggenheim Fellowship. The disc includes commissions by Bang on a Can and the People’s Commissioning Fund; Ethos Percussion Group funded by the Jerome Foundation; Youngstown State University; and a piece written for the Claudia Quintet’s cross-cultural educational journey to Istanbul, commissioned by the Weill Music Institute at Carnegie Hall.

Hollenbeck received degrees in percussion and jazz composition from the Eastman School of Music before moving to New York City in the early 1990s. He was profoundly shaped by the mentorship of two hugely influential artists: trombonist/arranger/composer Bob Brookmeyer and composer/choreographer Meredith Monk. His relationship with Brookmeyer reached back to the age of 14, when he attended the SUNY Binghamton Summer Jazz Workshop, and continued at Eastman, through NEA-funded composition study, and finally on the bandstand with Brookmeyer’s New Art Orchestra and in the studio with Brookmeyer and trumpet great Kenny Wheeler. For Monk, Hollenbeck composed and performed the percussion scores for five of her works: “Magic Frequencies,” “Mercy,” “The Impermanence Project,” “Songs of Ascension” and “On Behalf of Nature.”

Hollenbeck’s awards and honors include four Grammy nominations; the 2012 Doris Duke Performing Artist Award, the 2010 ASCAP Jazz Vanguard Award and a 2007 Guggenheim Fellowship; winning the Jazz Composers Alliance Composition Contest in 1995 and 2002; Meet the Composer’s Grants in 1995 and 2001; and a Rising Star Arranger win in the 2012 and 2013 DownBeat Critics’ Polls as well as in 2011 for the JHLE as Rising Star Big Band. John was a professor of Jazz Drums and Improvisation at the Jazz Institute Berlin from 2005–2016 and in 2015 joined the faculty of McGill University’s Schulich School of Music.