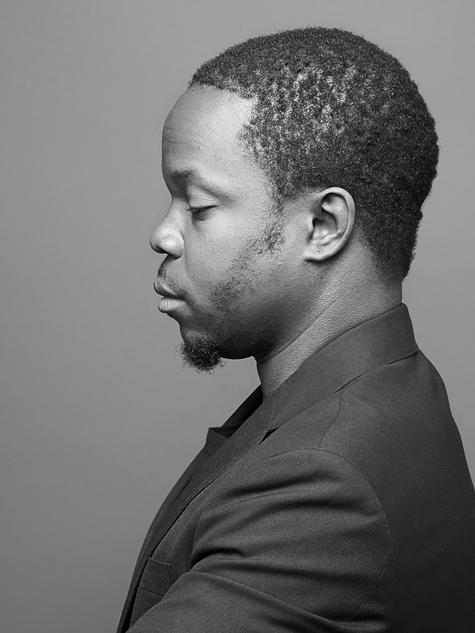 Hailed by NPR Music as “one of the most talked-about names in contemporary jazz,” 35-year-old trumpeter Ambrose Akinmusire has proven himself an artist of rare ability and wide-ranging aesthetic interests on his previous Blue Note albums When the Heart Emerges Glistening (2011) and the imagined savior is far easier to paint (2014). With his expansive new double-album A Rift in Decorum: Live at the Village Vanguard, Akinmusire reaches a new pinnacle: he and his longtime bandmates Sam Harris (piano), Harish Raghavan (bass) and Justin Brown (drums) join a distinguished strata of jazz artists who’ve made live recordings in the hallowed New York City venue.

“Justin and I have talked a lot about the spirits that we can feel in the Vanguard,” Akinmusire marvels. “It’s like I’m being bear-hugged by the spirits in there. Even just the people who showed up: Lee Konitz came down during the week, Billy Hart came down. Especially in a time like now, it’s great to have a place that still exists in the way that it originally existed.”

Akinmusire has worked more typically in a quintet setting with tenor saxophonist Walter Smith III by his side, but A Rift in Decorum finds him opting for the sparser texture and turn-on-a-dime execution of a quartet. “In history we don’t see too many trumpet quartets,” the leader says. “I think a lot of trumpet players shy away from it. I was into the challenge. When it’s just quartet I’m a little bit more free to express all of my influences.”

About the album title, Akinmusire muses: “A ‘rift’ to me relates to investigating a single moment. I think rifts are what make things beautiful. ‘Decorum’ ties into my feelings about what’s going on these days, musically and in the world. But there’s also something about the red curtains at the Vanguard: somehow in connection with that visual image A Rift in Decorum makes sense to me. Musically, I would add, the title is about celebrating the negatives and the positives, the ugly parts as well as the beautiful parts.”

How do these rifts manifest in the music? “I’ve been really into exploring extremes,” the trumpeter explains. “I take things that are really in your face and things that are so not in your face, and then it’s about rubbing those things together and hinting about a middle, or even questioning what a middle is. That’s what this quartet is about in my mind. So you’ll have a tune where we’re playing a lot of material, and then you’ll have something that’s much more spare, almost Morton Feldmanesque, or like a Chopin Nocturne. I think more and more I’m like this as a person — extremes, polar opposites, the far reaches of both.”

Akinmusire’s bandmates, uniquely attuned to his musical instincts and goals, bring those extremes into vivid relief, from the rapid-fire intricacy of “Brooklyn (ODB),” “Trumpet Sketch (milky pete)” and “H.A.M.S.” (short for “hard-ass m-f’ing song”) to the prevailing calm of “A song to exhale to (diver song),” or the solemn lyricism and bass-drone harmony of “Withered.” The longest bond in the band is between Akinmusire and Justin Brown: “We’ve been playing together as long as I’ve been playing jazz. I met Justin when I was 14 or 15 years old. There’s a long history of trumpet and drums together, so it’s been great to grow up and develop with a drummer as fantastic as him.”

Akinmusire met Harris and Raghavan around the same time in the mid-’00s. “Sam and I went to Manhattan School of Music together. Every time I heard him he would sound completely different. He checks out a lot of contemporary art, classical music, all kinds of things, and I think that really helps when I’m bringing in compositions. He’s so curious and he’s always studying. Harish and I met when I was at the Thelonious Monk Institute. He’s the instigator of the band: from the moment we start he’s already on a whole different path. When we do master classes I say that Harish approaches this music as some modern form of Dixieland or something — he’s improvising and thinking about melody and many times coming out of his register.”

The music’s harmonic advancement and dark mysterious moods come across with particular beauty and power on the Vanguard bandstand. The expressionistic effects that Akinmusire wrings from his horn — half-valve and non-pitch sounds, breath sounds, all part of the “extremes” he mentions above — root him in a trumpet legacy that extends beyond the expected post-bop influences to include early jazz as well as the avant-garde.

There’s a poignant story behind the opener, “Maurice and Michael (sorry I didn’t say hello)”: “I wrote it when I was artist-in-residence at the Monterey Jazz Festival. The place where you stay to compose is so beautiful. You’re by yourself overlooking the ocean, and if you look over to the right when it’s clear you can see San Francisco and Oakland. One day it hit me — wow, I have friends that are still over there in the hood who would never even know anything like this exists, so close by. Not long after that, I was on the BART home and I saw someone I grew up with named Maurice, who had a brother named Michael. I hadn’t seen them since high school. Maurice seemed to be on something, his eyes were red, he could barely walk, and I just couldn’t say hello. Here I am in some fancy suit with my expensive headphones and Moscot glasses, and this guy I grew up with looks like he’s homeless. It really affected me. I went through so many thoughts: ‘Do I think that I’m better?’ ‘Who am I to feel ashamed at whatever success I think I have?’”

The other titles are similarly evocative: “Taymoor’s World” and “First Page (Shabnam’s Poem)” are inspired by Akinmusire’s son and his wife, respectively. The “enclosure” in “Piano Sketch (beyond enclosure)” refers to the fact that the music is written without bar lines. “Diver song” is the composer imagining “a diver with scuba equipment going down really slowly — this is kind of the soundtrack to that.” “A moment in between the rest (to curve an ache)” deals with “right when something stops, that moment right after. It’s like if you have two moments and right in between the moments you pause, that’s what that song would be. Having an ache, then stopping it and curving it — imagine that was a sound. That’s what this song is about.”

One could reasonably ask if the band felt pressure that week at the Vanguard, following in the footsteps of such giants. “I don’t feel pressure when I’m playing with my band,” Akinmusire responds. “Maybe it has something to do with me not living in New York, feeling more like a normal person, just a regular guy who plays trumpet. And also the older I get, the more of a spiritual thing it becomes for me. I really believe more than ever that I’m not the one playing, so the pressure is kinda off me. My job is to do all the work necessary to allow the spirit to come through me.”

During his 15-year career, Ambrose Akinmusire has paradoxically situated himself in both the center and the periphery of jazz, most recently emerging in classical and hip hop circles. He’s on a perpetual quest for new paradigms, masterfully weaving inspiration from other genres, arts, and life in general into compositions that are as poetic and graceful as they are bold and unflinching.

His unorthodox approach to sound and composition make him a regular on critics polls and have earned him grants and commissions from the Doris Duke Foundation, the MAP Fund, the Kennedy Center, and the Monterey Jazz Festival, amongst others. While Akinmusire continues to garner accolades, his reach is always beyond—himself, his instrument, genre, form, preconceived notions, and anything else imposing limitations.

Motivated primarily by the spiritual and practical value of art, Akinmusire wants to remove the wall of erudition surrounding his music. He aspires to create richly textured emotional landscapes that tell the stories of the community, record the time, and change the standard. While committed to continuing the lineage of black invention and innovation, he manages to honor tradition without being stifled by it.

Akinmusire is a rigorous practitioner with an uncompromising dedication to creation. “I’ve learned to accept the consequences of believing in invention and creativity. You’re gonna be misunderstood. But my horse blinders have gotten a lot longer and lot thicker over the years.”