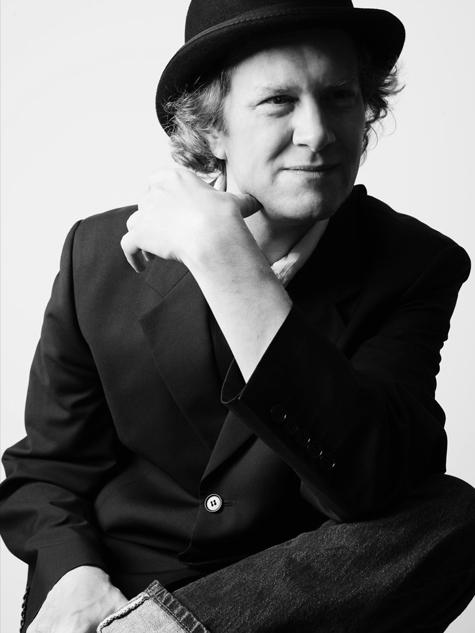 Django Bates is a pianist, Eb horn player, and composer who credits the variety of musical influences in his work to his childhood. His father is a collector of Jazz, and Romanian and African folk music.

Django was a founder member of Loose Tubes, the legendary British Big Band that was at the forefront of the 1980's European Jazz renaissance. This early involvement with large ensembles inspired Django to create his own orchestras Delightful Precipice 1991–1997 and stoRMChaser 2005–2010. These groups toured extensively throughout Europe to critical acclaim.

The Dutch Metropole Orchestra, Brodsky Quartet, Joanna MacGregor, Absolute Ensemble, Britten Sinfonia, and Duisburg Philharmonic are amongst the bands that have commissioned new works from Django. As performer he has appeared alongside Sidsel Endresen, Michael Brecker, Dudu Pukwana, Bill Bruford, Wynton Marsalis, and Ronnie Scott. In 1997 Django was awarded the prestigious Danish Jazzpar prize, dubbed the Nobel Prize of Jazz.

Django was the inaugural artistic director of FuseLeeds04, a new festival celebrating the wealth and diversity of today's vibrant music scene, for which he commissioned Radiohead¹s Jonny Greenwood to write a new work for two Ondes Martenots and the London Sinfonietta. In honour of saxophonist Evan Parker’s 60th birthday, Django commissioned sixty composers including Gavin Bryars, Sir Patrick Moore, Manfred Eicher, and John Zorn, to write one bar each, and then he quilted these into the piece Premature Celebration which was performed by The Sinfonietta with Evan Parker and Paul Lytton.

In 2005 Django Bates became the first Professor of Rhythmic Music in Denmark, at the RMC in Copenhagen. Here he created stoRMChaser whose weekly rehearsals allowed for the experimentation and development that resulted in his album Spring is Here (Shall We Dance?) – LM003.

Since 1979 Django has run a smaller band, Human Chain which toured five continents and forms the core of many of Django's larger projects. This November a Swiss version humanCHain with nine students and alumni of HKB, will perform new material at Sarajevo Jazz Festival’s 20th anniversary.

In 2010 Django released Belovèd Bird – LM004: a celebration of his childhood hero Charlie Parker. For this he invited Petter Eldh and Peter Bruun to form his first piano trio, the classic constellation so beloved of jazz listeners and players everywhere. Django later expanded his Parker arrangements to present this music with Norrbotten Big band at The Royal Albert Hall and with Monash Ensemble in Australia.

Django  Bates is currently a professor of jazz at University of the Arts, Bern, Switzerland.