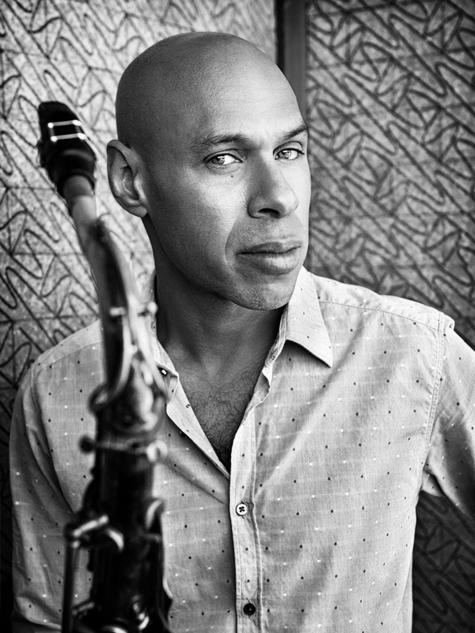 Joshua Redman is one of the most acclaimed and charismatic jazz artists to have emerged in the decade of the 1990s. Born in Berkeley, California, he is the son of legendary saxophonist Dewey Redman and dancer Renee Shedroff.

He was exposed at an early age to a variety of musics (jazz, classical, rock, soul, Indian, Indonesian, Middle-Eastern, African) and instruments (recorder, piano, guitar, gatham, gamelan), and began playing clarinet at age nine before switching to what became his primary instrument, the tenor saxophone, one year later. The early influences of John Coltrane, Ornette Coleman, Cannonball Adderley and his father, Dewey Redman, as well as The Beatles, Aretha Franklin, the Temptations, Earth, Wind and Fire, Prince, The Police and Led Zeppelin drew Joshua more deeply into music. But although Joshua loved playing the saxophone and was a dedicated member of the award-winning Berkeley High School Jazz Ensemble and Combo from 1983–86, academics were always his first priority, and he never seriously considered becoming a professional musician.

In 1991 Redman graduated from Harvard College summa cum laude, Phi Beta Kappa with a B.A. in Social Studies. He had already been accepted by Yale Law School, but deferred entrance for what he believed was only going to be one year. Some of his friends (former students at the Berklee College of Music whom Joshua had met while in Boston) had recently relocated to Brooklyn, and they were looking for another housemate to help with the rent. Redman accepted their invitation to move in, and almost immediately he found himself immersed in the New York jazz scene. He began jamming and gigging regularly with some of the leading jazz musicians of his generation: Peter Bernstein, Larry Goldings, Kevin Hays, Roy Hargrove, Geoff Keezer, Leon Parker, Jorge Rossy and Mark Turner (to name just a few). In November of that year, five months after moving to New York, Redman was named the winner of the prestigious Thelonious Monk International Saxophone Competition. This was only one of the more visible highlights from a year that saw Redman beginning to tour and record with jazz masters such as his father, Jack DeJohnette, Charlie Haden, Elvin Jones, Joe Lovano, Pat Metheny, Paul Motian, and Clark Terry. For Joshua, this was a period of tremendous growth, invaluable experience and endless inspiration.

Now fully committed to a life in music, Redman was quickly signed by Warner Bros. Records and issued his first, self-titled album in the spring of 1993, which subsequently earned Redman his first Grammy nomination. That fall saw the release of Wish, where Joshua was joined by the all-star cast of Pat Metheny, Charlie Haden and Billy Higgins. He toured extensively with Metheny throughout the latter half of that year. His next recording, MoodSwing, was released in 1994, and it introduced his first permanent band, which included three other young musicians who have gone on to become some of the most important and influential artists in modern jazz: pianist Brad Mehldau, bassist Christian McBride and drummer Brian Blade. A later edition of this ensemble included guitarist Peter Bernstein, pianist Peter Martin, bassist Chris Thomas and Blade. Over a series of celebrated recordings including Spirit of the Moment/Live at the Village Vanguard, Freedom in the Groove and Timeless Tales (for Changing Times), Redman established himself as one of the music’s most consistent and successful bandleaders, and added soprano and alto saxophones to his instrumental arsenal. Joshua’s second acclaimed quartet, featuring pianist Aaron Goldberg, bassist Reuben Rogers and drummer Gregory Hutchinson, was formed in 1998 and made its recorded debut on the 2000 album Beyond. The dynamic interplay and uncommon rapport of this group inspired Redman to write and record his first long-form composition, Passage of Time, which was released in 2001.

A year later, Redman began to channel his jazz sensibilities through new instrumentation and formed The Elastic Band, a flexible, electrified, groove-based trio built on an ongoing collaboration with keyboardist Sam Yahel and drummer Brian Blade. The band debuted on the 2002 releases yaya3 and Elastic. Drummer Jeff Ballard began to play regularly with the Elastic Band later that year, and he (along with Blade and Yahel) played a central role in their next recording, the Grammy-nominated Momentum, which was released in 2005 to inaugurate Redman’s affiliation with Nonesuch Records, and featured a diverse and exciting lineup of special guests.

In 2000, Redman was named Artistic Director for the Spring Season of the non-profit jazz-presenting organization SFJAZZ. Redman and SFJAZZ Executive Director Randall Kline had an idea that The New York Times called a “eureka moment”; the creation of the SFJAZZ Collective, an ensemble distinguished both by the creativity of its members and a unique primary emphasis on composition. Inaugurated in 2004, the eight-piece band consists of a multi-generational cast of accomplished musicians. The Collective’s repertoire features both commissioned works and new arrangements of the work of great modern jazz composers. In March 2007, Redman announced that he was taking a hiatus from both the SFJAZZ Artistic Directorship and the SFJAZZ Collective in order to focus on new projects.

The following month, Nonesuch released Redman’s first ever piano-less trio record, Back East, featuring Joshua alongside three stellar bass and drum rhythm sections (Larry Grenadier & Ali Jackson, Christian McBride & Brian Blade, Reuben Rogers & Eric Harland) and three very special guest saxophonists (Chris Cheek, Joe Lovano and Dewey Redman). On Compass, released in January 2009 (Nonesuch), Joshua continues to explore the expansive trio format, and with a group of collaborators as intrepid as he is – bassists Larry Grenadier and Reuben Rogers, and drummers Brian Blade and Gregory Hutchinson – Redman literally and figuratively stretches the shape of the trio approach; on the most audacious of these tunes, he performs with the entire lineup in a double-trio setting.

In May 2013, Redman released Walking Shadows (Nonesuch), a collection of vintage and contemporary ballads produced by his friend and frequent collaborator Brad Mehldau. This is Redman’s first recording to include an orchestral ensemble and includes a core ensemble of Mehldau on piano, Larry Grenadier on bass, and Brian Blade on drums. About Walking Shadows, the New York Times says "there hasn’t been a more sublimely lyrical gesture in his 20-year recording career."

After their first partnership during 2011 performances at the Blue Note in New York at the invitation of The Bad Plus, and intermittent performances together over the years, Redman and the tight-knit trio released their first studio album titled The Bad Plus Joshua Redman in May 2015 on Nonesuch. Redman explains the draw of this unique collaboration: "Playing with The Bad Plus has allowed me to explore a part of my playing, and my musical heritage, that I’ve never before accessed in quite the same way with any other group. The adventure with The Bad Plus pushes me toward the fringes and draws me into the core." Redman was nominated for Best Improvised Jazz Solo on the track “Friend or Foe” from this debut recording collaboration.