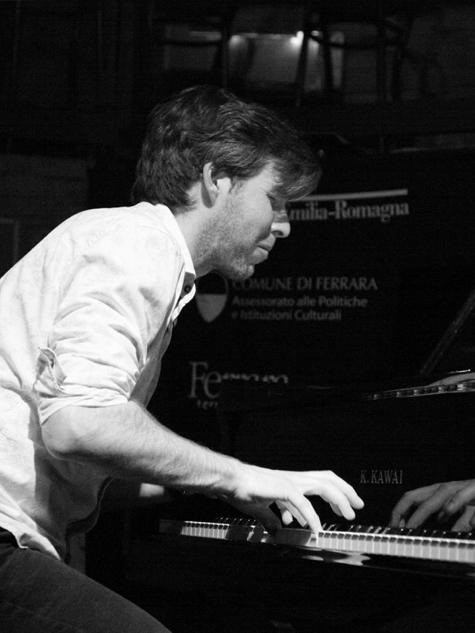 Gwilym Simcock, BBC Radio 3 Jazz Award winner and first ever BBC Radio 3 New Generations Jazz Artist, is one of the most gifted pianists and imaginative composers on the European scene. He moves effortlessly between jazz and classical music, with a ‘harmonic sophistication and subtle dovetailing of musical traditions’. Gwilym has been hailed as a pianist of ‘exceptional’, ‘brilliant’ and ‘dazzling’ ability, and his music has been widely acclaimed as ‘engaging, exciting, often unexpected, melodically enthralling, complex yet hugely accessible', and above all 'wonderfully optimistic’.

His magnificent 2008 premiere “Progressions” with the BBC Concert Orchestra enthralled a sell- out Proms audience and many thousands more on BBC2 TV. His many commissions include work for Sacconi Strings and Acoustic Triangle, "Contours" for the Aronowitz Ensemble, "I Prefer the Gorgeous Freedom" a Norfolk and Norwich Festival commission for community choir and jazz quartet, and "Simple Tales" for Britten Sinfonia soloists, “Move!” for The City of London Sinfonia and “Cumbrian Thaw” for the London Symphony Orchestra.

His solo album "Good Days at Schloss Elmau" on the prestigious German label ACT was lauded as "dazzlingly fresh", "world class", "stupendous" "phenomenal" "a cause for huge celebration" and was nominated for the 2011 Barclaycard Mercury Prize.

He is tours regularly in Europe and co-leads the Anglo American supergroup The Impossible Gentlemen (with Mike Walker, Steve Rodby and Adam Nussbaum) who were nominated as best ensemble in the 2013 Parliamentary Jazz Awards. This Spring he released two highly acclaimed albums on ACT “Instrumation” with the City of London Sinfonia and “Reverie at Schloss Elmau” a duo with his long time collaborator bassist Yuri Goloubev.

“No young musician outside the pop world has moved as fast into the upper reaches of his profession as Simcock”. Stuart Nicholson, Observer

"I feel confident that Simcock already deserves to occupy the inner circle of the great contemporary pianists along with Mehldau, Jarrett, and Rubalcaba" David Kane, Cadence U.S.A.