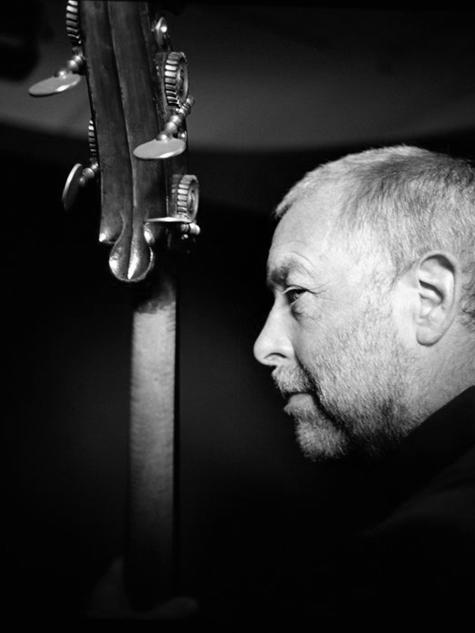 Contrary to popular depictions, evolution has never moved in a straight line. Nature is in a continual process of transformation, moving along myriad pathways of adaptation, refinement, experimentation, and discovery, creating new and staggeringly diverse objects of beauty and wonder along the way.

Over the course of a nearly five-decade career, bassist/composer Dave Holland has exemplified that evolutionary process in musical form, reinventing his concept and approach with each new project while constantly honing his instantly identifiable voice.

Since Holland’s professional debut in the mid-1960s, that voice has been heard in a remarkable number of different contexts. From the electric whirlwind of Miles Davis’ Bitches Brew-era band to the elegant flamenco of his collaboration with Spanish guitar legend Pepe Habichuela; accompanying the great vocalist Betty Carter in her last years to forging a new sound with the pioneering avant-garde quartet Circle alongside Chick Corea, Anthony Braxton, and Barry Altschul; standing alongside legends like Stan Getz, Hank Jones, Roy Haynes, and Sam Rivers to providing early opportunities to nowleading players like Chris Potter, Kevin and Robin Eubanks, or Steve Coleman; Dave Holland has been at the forefront of jazz in many of its forms since his earliest days.

In 2013, Holland celebrated 40 years as a leader in trademark fashion, by looking decidedly forward. On the anniversary of his first release, Conference of the Birds, which featured Rivers, Braxton and Altschul, Holland unveiled his latest quartet, Prism, a visceral electric band featuring his longtime collaborator Kevin Eubanks along with keyboardist Craig Taborn and drummer Eric Harland.

In addition to Prism, Holland continues to lead his Grammy-winning big band; his acclaimed quintet with saxophonist Chris Potter, trombonist Robin Eubanks, vibraphonist Steve Nelson, and drummer Nate Smith; and the Overtone quartet, with Potter, Harland, and pianist Jason Moran. In recent years Holland has been performing in a duo context with pianist Kenny Barron, recently releasing an album, The Art of Conversation (2014), and with flamenco legend Pepe Habichuela following their 2010 recording Hands. And he continues to explore his solo voice, as documented on the albums Emerald Tears (1977), Ones All (1993), and Life Cycle (1982), a solo cello recording.

Since 2005, Holland’s output has been released on his own Dare2 Records label, founded so that the bassist could exercise greater control over the recording and release of his music. The move came on the heels of a fruitful relationship with ECM Records that had lasted for more than three decades. Attentive to devising a one-of-the-kind packaging to match the product within, Holland drafted world-famous graphic designer Niklaus Troxler to craft the label’s distinctively bold and colorful look.

Born in Wolverhampton, England in 1946, Holland shifted seamlessly between jazz traditions from the beginning. While still in his native country, he collaborated with forward-thinking peers like saxophonists Jon Surman and Evan Parker and pianists Chris McGregor and John Taylor while also playing with more traditional forebears from an earlier generational, such as saxophonists Tubby Hayes and Ronnie Scott. It was while playing at Scott’s storied Soho jazz club in 1968 that Holland was spotted by Miles Davis, who immediately hired the young bassist for his ground-breaking electric ensemble.

Over the next two years, Holland would appear on Davis’ landmark recordings Filles de Kilimanjaro, In a Silent Way and Bitches Brew, and meet many of the artists with whom he would continue to revolutionize modern jazz. They include such renowned names as Chick Corea, with whom he co-founded the short-lived but influential quartet Circle; Jack DeJohnette, a frequent rhythm section partner during Holland’s ECM years and coleader of the collective Gateway trio with Holland and guitarist John Abercrombie; and Herbie Hancock, with whom Holland would reunite in the mid-90s and record such genre-defying albums as The New Standard and 2008 Grammy Album of the Year award winner Rover: The Joni Letters.

After leaving Davis’ group, Holland embarked on his solo career with the release of Conference of the Birds in 1973, marking the beginning of several key relationships: with ECM, with Braxton, and with Sam Rivers. At the same time, he was a prolific sideman both in the jazz world and without, where he recorded with rock and folk musicians including Bonnie Raitt, John Hartford, and bluegrass legend Vassar Clements.

The 1980s saw the formation of Holland’s first working quintet, featuring alto saxophonist Steve Coleman, trumpeter Kenny Wheeler, and trombonist Julian Priester, which would gradually transform into the quartet with Coleman, drummer Marvin “Smitty” Smith, and Kevin Eubanks that recorded Extensions in 1988 – the only one of Holland’s recordings to include future Tonight Show bandleader prior to their reunion in Prism.

The foundations for most of the groups that Holland currently leads were laid in the 1990s, when he founded his current quintet and his much-acclaimed big band. The latter won two Grammy awards in the Best Large Jazz Ensemble Album category, for its debut,

What Goes Around, in 2002 and for its follow-up, 2005’s Overtime, both on Dare2. A third Grammy came in 1999 in the Best Jazz Instrumental Performance, Individual or Group category, for the all-star quintet record Like Minds (Concord), with Gary Burton, Chick Corea, Pat Metheny, and Roy Haynes.

A Fellow of the Guildhall School of Music & Drama in London, where he studied from 1965–68, Holland has received honorary doctorates from Birmingham Conservatoire in England and both Boston’s Berklee College of Music and New England Conservatory, where he has been a visiting artist in residence since 2005. He served as artistic director for the Banff Centre Jazz Workshop in Alberta, Canada for seven years in the 1980s and is currently an artist in residence at the Royal Academy of Music and the University of Miami.