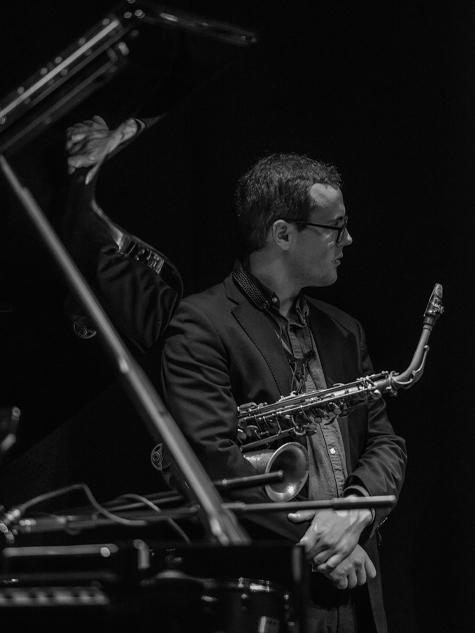 Born into a family of musicians Josh Schofield has always been surrounded by music. His first and favourite CD as a child was an Ella Fitzgerald compilation which, after a misadventure with the violin, led to him taking up the saxophone, aged 9.

Josh was lucky to receive early guidance from Julian Joseph and Percy Pursglove and on leaving high school won a scholarship to Royal Birmingham Conservatoire to study with Mike Williams and John O’Gallagher. Here he had the opportunity to play alongside visiting artists such as Dave Holland, Nate Smith and George Colligan.

Whilst in Birmingham Josh played as sideman with a number of groups and developed his skills as a band leader. The Josh Schofield Quartet was selected by the Jazz Promotion Network for their emerging talents scheme, has toured throughout the UK, performing at venues such as Kings Place London, Harrogate Festival and Cheltenham Jazz Festival and attracting attention in Jazzwise’s yearly ‘who to look out for’ feature.

In 2018 a substantial award from the Countess of Munster Trust enabled Josh to enrol on the Masters Programme at the Conservatorium van Amsterdam where he furthered his studies under the tutelage of Ben Van Gelder, Jasper Blom and Dick Oatts. He formed a new international cordless trio, performed at North Sea and Amsterdam Jazz Festivals, and appeared in projects with Ben Wendel, Vince Mendoza and Bob Minter.