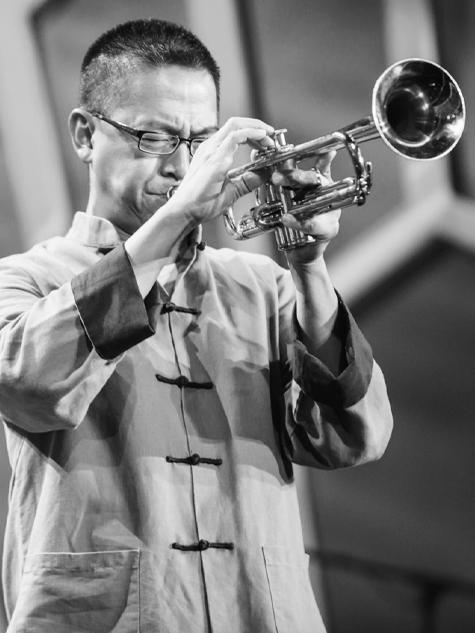 Cuong Vu is widely recognized by jazz critics as a leader of a generation of innovative musicians. A truly unique musical voice, Cuong has lent his trumpet playing to a wide range of artists such as Pat Metheny, Laurie Anderson, and David Bowie.

As a youngster, Cuong's intense dedication and love for music led him to a full scholarship at the New England Conservatory of Music where he received his Bachelor of Music in Jazz studies with a distinction in performance. Transitioning from his studies in Boston, he moved to New York in 1994 and began his career actively leading various groups while touring extensively throughout the world. As a leader, Cuong has released eight recordings, each making critics’ lists of the 10 best recordings of their respective years and has received rave reviews from notable publications such as the New York Times, The New Yorker, Harper’s, the Guardian, BBC Music Magazine, JazzTimes and Downbeat. Each record displays how he has carved out a distinctive sonic territory as a trumpet player, blurring all stylistic borders while developing his own compositional aesthetic and sound world.

A recipient of the 2 Grammy for Best Contemporary Jazz Album as a member of the Pat Metheny Group, Vu has garnered internationally acclaim, having been recognized as one of the top 50 Jazz Artists in an article called “The New Masters” from the British magazine, “Classic CD” and has been named the Best International Jazz Artist by the Italian Jazz Critics’ Society.  Amazon listed Vu’s “Come Play With Me” on their “The 100 Greatest Jazz Albums of All Time.”  Each of his recordings as a leader have been placed on esteemed jazz critics’ Best Of/Top Ten releases of the year.  Most recently Cuong received Europe’s Echo Jazz 2017 Awards, International Instrumentalist for his work on his recording, “Cuong Vu Trio Meets Pat Metheny”.

​Currently a professor and the chair of Jazz Studies at the University of Washington, Cuong is also a "Yamaha Performing Artist", playing the Yamaha Custom YTR8310Z trumpet.